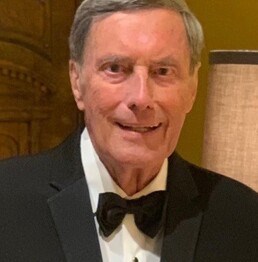 Captain James Edward Swanson, age 81 of Eagan and Edina, MN, passed away peacefully on March 12, 2022, after a valiant battle with acute pulmonary problems...

Jim was born in Iron Mountain, Michigan on March 19 1940, to the late Edward and Vera (Fearing) Swanson. The oldest of five children, Jim grew up in nearby Florence and Wabeno, Wisconsin where his father worked as a baker. As a young lad Jim worked alongside his father in the bakery. He attended Wabeno High School where he was known as a well-rounded student having participated in almost every sport and school activity including basketball, football, band, choir, glee club, and student council.

It was natural for Jim to go on to attend the University of Wisconsin at Madison. As these were the years of mandatory ROTC, he opted for Air Force ROTC. During his senior year Jim received FAA approved training in light aircraft as a prescreening for USAF Pilot Training. The same week he received his BA degree in political science, he was also commissioned a Second Lieutenant in the US Air Force Reserve.

Shortly afterwards, on August 11, 1962, Jim married Joan Kuehni who also a student at the University of Wisconsin. Before summer’s end Jim and Joan were settled in at Vance AFB, OK, where Jim received Undergraduate Pilot Training. Upon earning his silver wings, he was permanently assigned to a SAC B-52 squadron at Bergstrom AFB, TX. In time Jim was deployed to Anderson AFB, Guam from where he flew 62 combat mission over North and South Vietnam. For these missions he was decorated with several combat citations.

Jim enjoyed flying; after returning to Bergstrom AFB from a combat tour he decided to separate from active-duty Air Force and seek airline employment. Northwest Airlines was a logical fit for this upper Midwest native and they agreed by assigning him a 12/04/1967 date of hire.

Jim’s first crew assignment at NWA was as Second Officer on the Boeing 727. Thereafter he basically followed the Minneapolis (MSP) base litany of crew positions: Second Officer on the 727, 720/320 and Copilot on the 727 and DC-10. Jim’s initial Captain upgrade was on the 727. He also flew Captain on the DC-10 (a favorite) and both the 747 Classic and 747-400. Later in his career Jim served the NWA Flight Training Dept. as Instructor/Check Airman on the DC-10.

Jim and Joan raised five children. During their children’s youth Jim took an active role in coaching and/or supporting their hockey and baseball teams. He had a passion for fishing and camping on the wild rivers of northern Wisconsin and Michigan that rubbed off on his children. Jim additionally assumed an activist role with the Wild River Alliances of Northern Wisconsin and President of the Florence County Lake and Rivers Assn.

Jim’s Northwest Airline career ended in March 2000. While he thoroughly enjoyed his airline career, Jim retained a burning desire to resume hunting and fishing in ‘God's Country’ of Northern Wisconsin. In short time Joan and Jim acquired a lake home on Keyes Lake, WI, a mere 18 miles northwest of his hometown of Iron Mountain, Michigan. He especially treasured the up-north adventures with his lifelong friend NWA pilot Art Bein, his brothers Ron and Don, his sister Bev and all the extended Swanson family. Many tall fishing tales were shared among them all! The grandchildren especially liked Grandpa's updates on the elusive ‘Walter Walleye.’ Jim was an avid fan (Is there any other kind?) of the Wisconsin Badgers and Green Bay Packers. Even though he lived his last fifty years in Minnesota, Jim stayed true to his Wisconsin roots and teams.

Most importantly, Jim was a loving husband to Joan for sixty fun and eventful years and a devoted father to his five children Wendy, Suzanne, Kristen, Anne, and John, and proud Grandpa and ‘Pop Pop’ to ten wonderful grandchildren Jay, Sean, Alex, Kate, Mikey, PJ, Chloe, Max, Mariza, and Zio. Grandpa never missed a choir performance, band concert, sporting event, or graduation. He was his grandkids' biggest cheerleader. Jim loved to make people laugh and was always quick to give praise and encouragement. Jim continues to be a role model to us all.