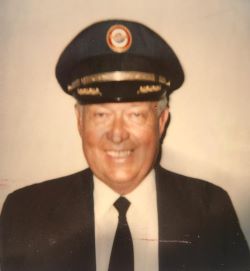 Captain Otto Everett Tessmer, age 88, passed away peacefully in Alexandria, MN on Friday, November 27, 2020. “Sweet Loveable Evy” (as he liked to be called) was born on April 27, 1932, in Alexandria Minnesota to Otto and Sofy (Haugdahl) Tessmer.  On April 18, 1959, he married Mary Jill Fordham. They raised a son, John, and two daughters, Paula and Karla.

Everett’s extensive flying career began with the Navy in 1954. He spent most of his Naval career instructing in Pensacola Florida. Everett claimed that his navy career saved him after two attempts at obtaining a college degree, one at the University of Minnesota and another at St. Olaf in Northfield, MN.  When asked why he left these institutions, he would reply, “I was not kicked out. Rather, I was asked to never return.”

After leaving the Navy in late 1957, Everett was hired by Northwest Airlines on February 12, 1958. He flew as Captain on the 727, 707 & DC-10. During his thirty-five year airline career, Everett served as a respected Instructor and the FAA-designated Check Airman for orals and type ratings on the DC10. In 1970, he was elected by ALPA (Airline Pilots Association) to serve on the Master Executive Council at Northwest Airlines. Everett retired from NWA in April 1992, at that time he was the senior pilot on the DC-10.

Everett was well like by his fellow pilots. Without a doubt one of his closest ‘line’ friends was Bill Carrothers. Unfortunately for Everett, late in his career he developed heart anomolies that required bypass surgery and a FAA mandatory grounding.  At Otto Everett Tessmer's retirement party Bill Carrothers shared the following: he described how he met Everett Tessmer at the U. of Minnesota. Apparently Ev was an academic year ahead of Bill and is thought to have pledged to the same fraternity. In their college classes and activities, Everett was always first. This pattern continued into the Navy. Everett enlisted in the Naval Aviation Cadet (NAVCAD) program prior to Bill (upper classman), he earned his wings before Bill, qualified with the USN fleet, etc., all prior to Bill Carrothers. It was Everett who first talked to Bill about airline flying and predictably it was Everett who first left the Navy and the first hired by NWA. The earlier employment assured that Everett was always senior to Bill. This implied better schedules, first option for holidays off, and higher paying crew positions. If that were not insult enough, Everett even dated Bill’s wife Pat before Bill.

It was the same Pat Carrothers who went to the tennis court to inform Bill that his pal Everett was in post-surgery care after undergoing heart bypass surgery at Mayo Clinic – Phoenix. When Bill heard the news about Everett he sat on a bench and broke down. Looking tearfully at Pat he said, “You know what this means don’t you? It means I am finally #1.”

You can imagine the response among the pilots at this retirement gathering.

When not working, Everett loved the game of golf, especially the grudge matches that included his late brother Bob, his son John, and his nephews. One of his greatest golf achievements was playing Augusta National Golf Club, home of the Master’s Tournament, courtesy of his beloved niece Anne-Marie Dobbs.

Everett was best known for his marvelous sense of humor. He was given the title “The King of Wit” as he always had a hilarious comeback to any joke. However, he was not known for being handy around the house. For example, when asked by a neighbor who was fixing a boat motor to bring him a screwdriver, Everett promptly returned with vodka and orange juice.  It was 8:30 a.m.

Mostly, Everett loved his family. While gregarious and social most of his life, in his later years, all he wanted was to be near his children and grandchildren. He will be so greatly missed.

He is survived by his three children, John Tessmer, Paula Olhausen, and Karla Jones, and seven grandchildren, Allen, Laura and Bob Tessmer, Adam and Ashley Olhausen and Jackson and Sophie Jones, his brother Ken Tessmer and wife Tolly, and many adoring cousins, nieces, and nephews.

One of the best has passed amongst us.