Flight of the past

A Blast From the Past

So . . . . winter is the wrong time of year to fly an open-cockpit biplane

across the country, right? But sometimes the right buyer finds the right airplane at the wrong time, and wants it flown to it's new home. Thus, my buddy Dean Jacobson (also NWA/DAL ret.) and I launched from Northern California on a 45 degree morning in very late November. He was delivering the airplane to Virginia Beach, VA. I was only going as far as El Paso (actually Las Cruces, NM--about 50 miles north of El Paso).

A 1942 Boeing PT-17 Stearman. It started life as a primary trainer in the Army Air Corps during World War Two. It was originally powered by a 220 horsepower Continental radial engine however, somewhere along the way, this one was re-engined with a 450 horsepower Pratt & Whitney R-985. This is both good news and bad news. With the additional horsepower, it performs much better than it would with the original Continental. However, it also consumes much more fuel. And since it still has just the original 46 gallon tank, it's fuel duration is only about two and a quarter hours. On top of that, the Stearman is a rather aerodynamically dirty collection of wings, struts and flying wires so, even with the increased horsepower, it's still not very fast. We averaged around 115 mph. The combination of the limited fuel capacity and the modest cruise speed relegated us to flying fairly short legs--about 170 miles. It has no on-board navigation capability, so we both carried iPads with navigation programs, along with iPhones as backups. Paper nav charts would have been very difficult to manage in the windy, open cockpit.

After it's military service, the airplane spent quite a number of years earning it's living as a cropduster. But it was very nicely refurbished and turned into a "toy" several decades ago. Today, it's probably cleaner, prettier and more mechanically sound than it's been at any other time during it's life. 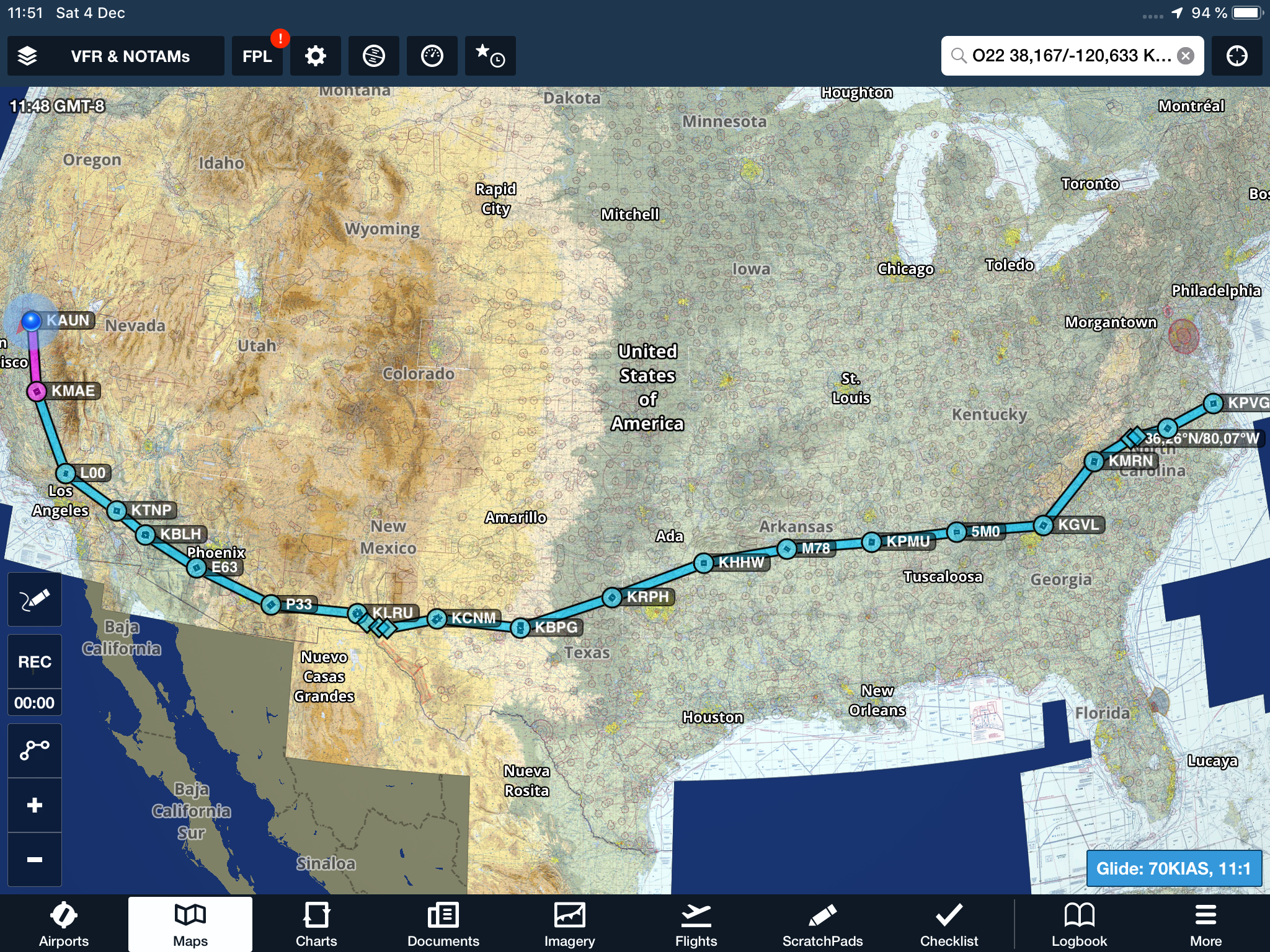 If it was summertime, and warm, we probably would have flight planned through northern Nevada, Utah, Wyoming and then across the Great Plains. But that would necessitate cruising at altitudes of 10,000 feet or higher to get over the Rockies. Show of hands here . . . . who would like to fly an open-cockpit airplane over the Rocky Mountains, in the winter, at 11,500 feet? Not me. So we planned an end-run around the southern extent of the Rockies and away from the worst of the high terrain. This enabled us to never have to climb higher than 7,500 feet. And most of the flight was done quite a bit lower than that.

From home, we headed southeast along the eastern edge of the San Joaquin Valley and hopped over the south end of the Sierra Nevada Mountains at Tehachapi. Then eastbound through the Antelope Valley, across the Mojave Desert and into Arizona. We passed slightly south of Phoenix, just north of Tucson and then into southern New Mexico. Once east of El Paso, the terrain was not a major factor until reaching the Great Smoky Mountains of eastern Tennessee and the Carolinas. At that point, once again, an end run around the south end of the mountains kept the cruise altitudes modest.

Due to a lack of modern electronics in this old airplane (no transponder or ADS-B), we were excluded from the congested airspace that surrounds bigger cities. In consequence, the airplane's short range, the desire to avoid high terrain, and the need to avoid big cities all combined to make the flight planning complicated and a bit of a challenge. We'd work out what we thought was the perfect routing, only to find that one of our planned fuel stops temporarily had no fuel. Or the runway was closed for resurfacing. And we'd rework the flight plan again. 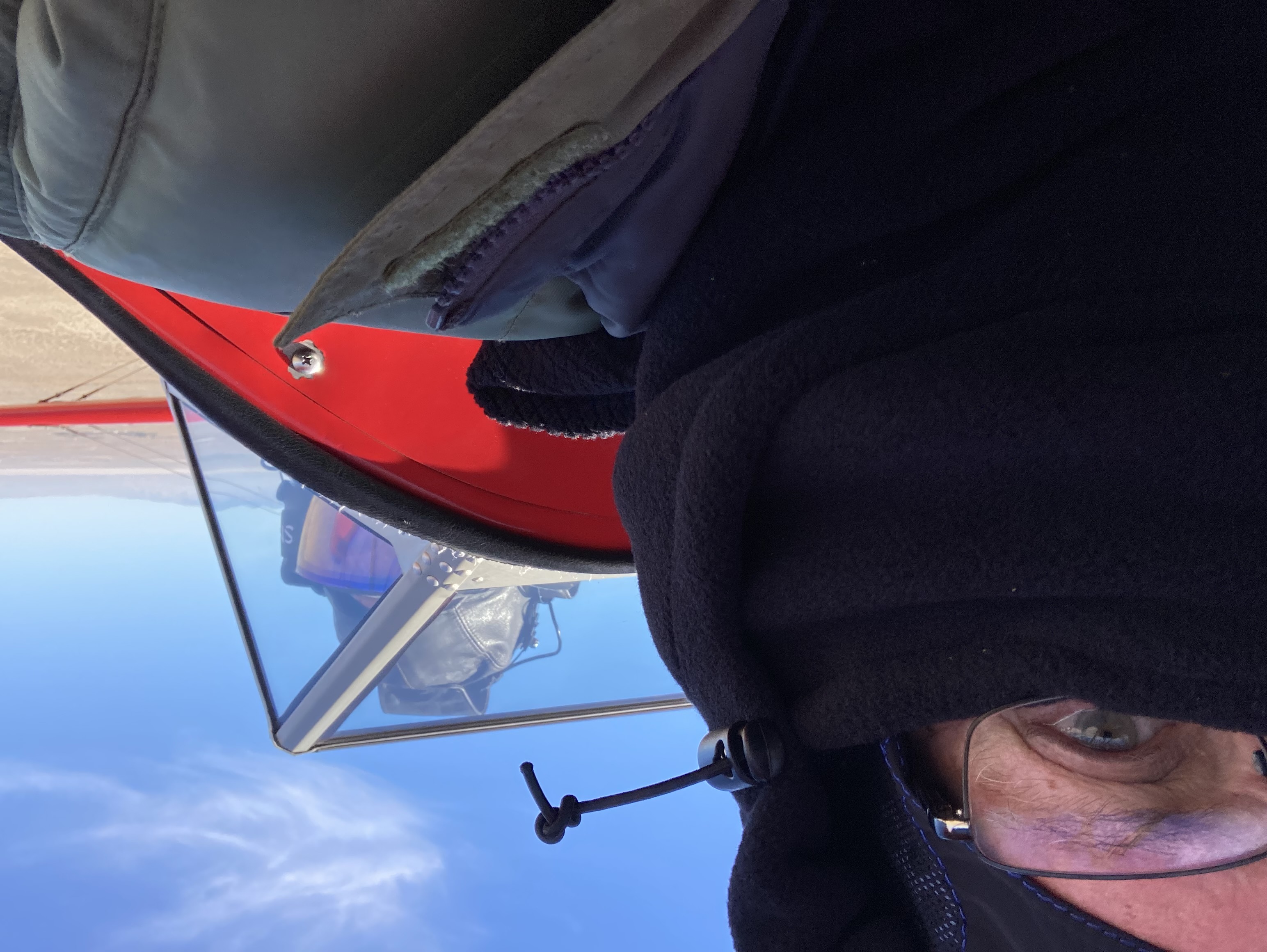 little bit of Stearman time, and I'd flown one a couple of times. But we both have a fair amount of taildragger time, and the Stearman is not really a difficult airplane to fly. However, it was cold, noisy and primitive. We were dressed very heavily in lots of layers, including electrically heated socks. I felt like the Michelin Man climbing into the cockpit. One of the unexpected issues was the very vigorous updraft of air that seemed to come from beneath the floorboards while in flight. It was strong enough that anything that wasn't attached or secured would be sucked up and out of the airplane. Take your glove off and forget to hang on tightly to it? Fffwitt . . . . it's gone. I didn't take too many photos while in flight because I was worried about losing my iPhone to the slipstream. Frankly, I considered it to be a major success that I made it all the way to El Paso without losing my glasses, sunglasses, gloves or phone. When I titled this "A Blast From the Past", the term "blast" refers to the blast of air through the cockpit.

And, did I mention that it was noisy? The Stearman rumbled, rattled and vibrated it's way over the countryside even when only doing about 115 mph. We both wore "Mickey Mouse ear" headsets with boom microphones. The interphone system worked quite well and we could communicate very clearly . . . . . . on the ground. But in flight, the combination of the noise, plus the wind buffeting our microphones made interphone communication almost impossible. There was lots of shouting and "say agains" involved. We found that the use of hand signals was one of the more successful communication techniques. It was only afterwards that it occurred to us that we might have been able to use our phones to text each other. Of course, then we might have lost them to the slipstream. Fffwitt!

With one wing above you, and the other wing below you, and a large engine in front of you, the inflight visibility from the cockpit is what I would describe as mediocre. But, on the ground, the visibility is just downright lousy. In order to see where you're taxiing, you need to make S turns down the taxiway and look AROUND the nose. This is a technique that works well . . . . unless you're on a narrow taxiway where you can't really make much of an S turn without running off into the dirt. Fortunately, we were able to avoid running over anything.

Since I retired ten years ago, the majority of my flying has been in our RV-6. The RV-6 is an airplane that is quite nimble, and is best flown with your finger tips. The Stearman, on the other hand, has a control stick that's about the size of a baseball bat, and you fly it with large arm movements. You begin to feel like you're stirring a witch's cauldron.

We worked hard at comi

ng up with a route of flight that was somewhat straight, avoided high terrain, and allowed us to stop for fuel about every 170 miles or so. We were fortunate to have a window of good, clear, calm weather all the way to the east coast, and we were in a rush to take advantage of those conditions. We attempted to squeeze four, one-and-a-half-hour legs into each day. However, that was easier said than done. First of all, due to the season, we were dealing with days where we only had about ten hours of daylight. Then, we were flying eastbound so that we were losing an hour to time zone changes periodically. The other issue was that this pretty Stearman is an airplane that attracts a lot of attention. Almost everyone who saw us parked at the gas pumps wanted to come out and talk and ask questions. "Where are you going?" "How fast does it cruise?" "How much fuel do you burn?" "Do you get cold?" "Wow, must be fun!" We attempted to be friendly and answer their questions. But, we needed to get refueled and back in the air too.

In the end, itwa s 18 legs over the span of five days to get theairplane to Virginia. All things considered, it went quite smoothly. 540 gallons of avgas were burned, along with two gallons of oil. Note that it was two gallons, not two quarts.

No thoughts on “Flight of the past”