It has always been a dream of mine to see all the Americas, especially the United States. I have seen this country from 30000+ ft but never from 5ft 11in. Purchasing a 34ft motor coach was a start.  It was a motivator. Convincing my wife, Whit, took a while. We took lot of short trips. The first long trip was to the convention in New Orleans. The birth of a granddaughter and Covid threw a one-year delay.

Finally, we planned to start on May 1 2021.  Then came the problems. As with all problems, quick resolution was not in the cards.  The departure date was set for May 10th. The night before, we had the new washer breakdown with a load of wash in it. Whirlpool maintenance was a week out. Using my FE skills, I got the load out and into the dryer. Whirlpool will probably void the warranty. The dryer worked all night drying the super wet clothes.  Fate has a way of messing with one’s plans.

We left the next day and headed for Missoula Mt. to visit my son who had just moved there for work. He bought two places. A hide -a-way cabin in the mountains outside Georgetown Lake Mt, and a lot to build his new mansion in Missoula.

The drive to his cabin goes out of Missoula on I90 to Drummond and Mt. 1, the first paved road in Montana, 1928, heads down to Philipsburg. A mining town with more bars per block than people. The road then enters a canyon on its way to Georgetown lake. 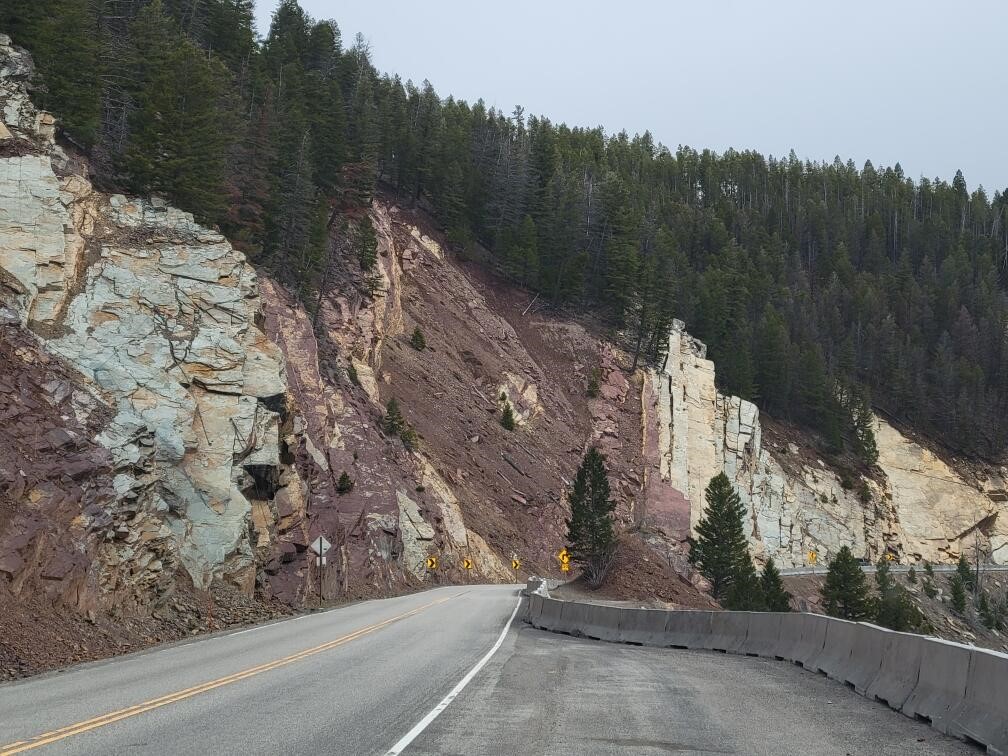 It is an engineering marvel as it hangs out over the canyon. Whit had to close her eyes to keep from being scared.

We tried to play and work while there, but the elevation of 6500 ft made this old aviator tired. How come cabin pressure of 8500 ft never affected me?

I decided we would leave the high altitude for the lower altitude of Fishtail Mt. We stopped at the ranch of Bonnie and Art Daniels. Art and I had the dubious task of visiting all the Mountain stations during the 1978 strike to get support for our efforts on ending the strike. We met with the governor of Montana who along with the other state governors forced a meeting with Mr. Nyrop. Word got back that Nyrop supposedly was perturbed with me.

I never met Mr Nyrop and yet I was apprehensive on every check ride; it may be my last…..retribution. Many years later I was walking into Bob Stone’s funeral and coming down the hall was Mr. Nyrop. Being as polite as my mother taught me, I said “Good evening Mr. Nyrop, “How are you doing.?”

“Doing great JAY and thanks for asking”, and he continued on his way down the hall. To say the least, I was flabbergasted. “How did he remember my face and name. Later, I was told he had an excellent memory of faces and names.

The next day Art asked if I wanted to go flying in his Cessna 180. He said “ lets go up to Roundup and visit Doug Parrott”. I knew Doug from my beginning years at Northwest. I may have had a trip with him. It was special pleasure to see him. At 96+ he has us youngster beat. Looked great and is in good health. Shirley did say he does forget every now and then……I’m 78 and I forget a lot. Art and I visit with him for awhile and as we left, he gave me a copy his book “The Greatest Time to Fly” and autographed it. It is on Amazon and a great read.

We left the Daniels for Joplin, Missouri traveling through the states of Wyoming, Nebraska, Kansas, and “Misery” oops Missouri. The roads in this country range from ok to miserable. I do not know how true this is….each state has to maintain the federal highways, and then delegates that responsibility to the counties the roads pass through.  I got this from observation. Pass a county sign and the roads either became smooth and well maintained. Cross into the next county, the road are rougher than a Roman stone highway of centuries ago.

Driving a 34 ft motor coach is like drive a tractor trailer, especially if you have a tow vehicle. The truckers seem to not really care for our presence. Some are just plain rude. They are never in a hurry to pass you. As they come up behind you, one can feel your vehicle getting pushed toward the shoulder. The cabs of these trucks have drag resistance built into them. This creates a bow wave which will push you off the road. Then as the trailer passes you, it sucks you back in. Today there are more trucks on the road than cars. Hopefully, this will change as more people get the vaccine and get to travel.

We stopped in Joplin for a granddaughter’s graduation. Right now, on the road to Nashville to work on my other daughter’s new place. The responsibilities of parenthood.

Interesting foot note. The route from Joplin to Nashville takes one through the states of Missouri, Illinois, Kentucky, and Tennessee. It is a convoluted route but as such you really get to see Americana, the rural America.

We have had to abbreviate this plan excursion through the United States. The east and south east will have to wait for next year. From Nashville we will head southwest and then return via the coastal route back to The Pacific Northwest and home.

We are a diverse nation. From the ranchers of Montana, the miners of Wyoming to the farmers in Kansas, we are a nation founded not by a culture, religion, ethnicity or color but by a document…..the constitution.

No thoughts on “The Vagabond”