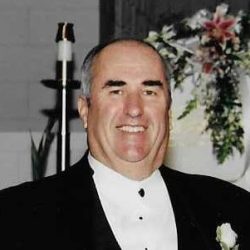 Keith L. Sterling, age 81, of Fort Myers, FL (formerly of Apple Valley, MN), passed away on Oct. 5, 2022. His parents were Robert and Suzie Sterling.  Keith’s father worked in the Lab at Penn Steel in Titusville, PA and owned a small Evinrude/Boat repair shop.

The family lived in Titusville PA during Keith’s high school years. Titusville is located 45 miles southeast of Lake Erie and half that distance from the west edge of Allegheny National Forest, where no doubt Keith delighted in hunting, fishing, and camping with family and friends

After high school Keith studied Electrical Engineering at Grove City College, PA while concurrently completing Air Force ROTC. After college graduation and Air Force commissioning, Keith reported for pilot training at Craig AFB, AL. Keith had a most unusual Air Force career in that after earning his wings, he was assigned to Air Training Command as an instructor pilot at the same base where he himself had been trained. The entirety of his Air Force flying was done in the T-37 and T-38 trainer aircraft.

His airline career with Northwest Airlines career began on June 16, 1969, at Minneapolis, Minnesota. For Keith the glamour stations of Europe and Asia were a distant dream compared to his monthly schedule. His initial qualification was as Second Officer on the Boeing 727. To NWA line pilots of his era, Keith’s date of hire speaks volumes about his seniority and career assignments. Due to no fault of his own, the seniority system locked Keith onto the bottom of the list and the tailings of NWA domestic flying. Instead of Tokyo or London, Keith was stuck with ‘junior trips’ between the less glamorous NWA domestic stations such as Fargo, Grand Forks, and Bismark, ND, and the Montana mountain stations in the winter. During the predawn hours of the bitterly cold winter months and you could reasonably expect to see Keith doing the exterior walk around inspections of his aircraft. If anyone paid his line flying dues it was Keith Sterling.

After a considerable delay, he upgraded to First Officer on the Boeing 727, the DC-10, and completed his career as First Officer on the Classic Boeing 747. Keith put away his flight bag and retired as an airline pilot in September 2001. He loved the job so much that he would say he felt like he was stealing his paycheck. NWA allowed him to travel the world and seeing the world he always dreamed of seeing.

Service to our country was big in Keith’s life and made him deeply patriotic. He was active in many volunteer groups and took immense pride in supplying and properly retiring American Flags with the American Legion in Cypress Woods, Florida. It is not a widely known that Keith was extremely competitive; from betting on the biggest and most fish caught for the day, to driving race cars in circle tracks and drag racing, hunting, golf, billiards, or any fun activity.

Keith is survived by his loving wife of 59 years, Ginny; and their son Mike. Keith was a very loving, devoted husband and a proud father. A lover of all things outdoors which fueled his desire to travel and see more. In retirement, Ginny and Keith traveled SE Asia and Europe by air and widely across North America in their RV. They both loved time together and with friends.

Be there no doubt, Keith will be deeply missed by all who knew him.