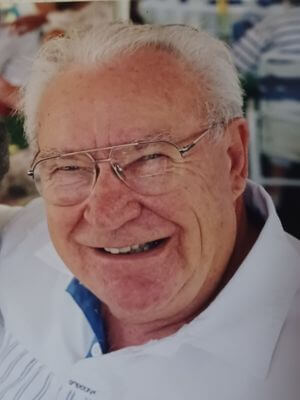 NWA pilot Clarence Louis Holter age 98, passed away peacefully on October25th at The Regent of Burnsville. Clarence was born June 26, 1924, in Minneapolis, MN. He was the only child of Louis Holter of Fetsund, Norway, and Henrikke (Hendrickson) Holter of Tromso, Norway.

When Clarence was about two years old, he moved to a 150-acre farm outside of Delano, MN, with his parents and his Uncle Anton and Aunt Jette Holter. They lived on this farm for about 10 years and moved back to Minneapolis after Clarence's mother died in February of 1936.

Clarence began working at Northwest Airlines in August of 1942 as an Apprentice Mechanic. He joined the Army Air Corp. in May of 1943 and went to basic training at the Lincoln Army Airfield in Lincoln, Nebraska. Following basic training, he went to aircraft mechanics school at the Amarillo Army Airfield, in Amarillo TX. He then trained as a North American P-51 mechanic in Inglewood, CA. After completing his training, he was transferred to an airfield in Meridian, Mississippi, to work on P-51s. He was then transferred to Buckingham Army airfield by Fort Myers for B-24 gunnery school. While stationed at Buckingham, he became sick with pneumonia. The class he was training with was activated and went over to England while he was in the hospital. After recovering from pneumonia, the Army Air Corp was looking for A-26 gunners, so he was transferred to Florence, SC, for that training. Just as he was finishing training, the war ended.

After the war, Clarence returned to work at Northwest Airlines where he met his future wife, Audrey Malecky . They were married September 1, 1951. Clarence and Audrey settled in Richfield, MN. They had three children between 1952 and 1961. In the mid 1950's, Clarence trained as a Flight Engineer, and began working as a crew member on the Boeing Stratocruiser. By the early 1960's he earned his Commercial Pilot's certificate and became a co-pilot on the Boeing 707.

He continued working in this role until Northwest made their initial purchase of Boeing 747s. He then began training as a Flight Engineer on the new 747. He was privileged to be a member of the crew for Northwest's inaugural flight of the 747 on June 22, 1970, from Minneapolis/St. Paul to New York's JFK airport. In September of 1973, they moved to a 40-acre farm near Northfield, MN. They often enjoyed gathering with friends to play cards. Clarence continued working at Northwest, flying to Hawaii, Tokyo, and Hong Kong during one half of the month, and flying to Europe during the other half of the month. He retired from Northwest in 1984.

After retiring, Clarence enjoyed traveling in his RV with Audrey to Texas and Arizona during the winters, spending time with friends and family. He continued to be active in RVing, still going to campsites in MN with Audrey until the age of 90. He was an avid fisherman throughout the year, enjoying ice fishing in the winter when possible. He hunted as well, participating in the muzzleloading deer season well into his nineties.

A special thank you to the staff of Apple Valley Villa, Regent of Burnsville and Grace Hospice.