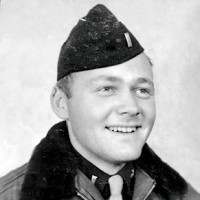 Captain Richard ‘Dick’ Brown age 99, took his final flight - home to heaven September 19, 2021. Dick was born in Minneapolis on January 6, 1922. His family moved to Fargo, N.D. when he was of early age. He attended school in Fargo and graduated from Fargo Central High School in 1939.

Two years later, on April 07, 1941, Dick was hired by Northwest Airlines as a Ticket Agent – Field Traffic. Soon thereafter World War II and ‘the inevitable draft’ was looming heavy in Dick’s life. After extensive testing and evaluation, he qualified for Army Air Corps Aviation Cadet pilot program. Dick performed well and earned his silver pilot wings and a commission as a 2nd Lt. His next military assignment involved extensive training in the Douglas B-26 twin engine attack bomber. In early 1944 Dick was shipped overseas to England from which he flew sixty-six combat missions over Europe as a B-26 aircraft commander. One of those missions was flown over France on D-Day in support of the Normandy Landings. He separated from the Army Air Force in June of 1945.

1945 was a big year for Dick Brown; he returned to the USA, he married Jean Fortin, and resettled in Minneapolis as a reinstated Northwest Airlines employee. Although Dick’s pre-war employee status was that of a Ticket Agent, he soon matriculated into the pilot ranks.

Dick flew most of the passenger aircraft of his era operated by Northwest Airlines. He had extensive experience in the DC-3, DC-4, DC-6, DC-7, the Lockheed Electra and the Boeing 707 series, and the 747 classic. He also served with the NWA Flight Training Dept. as an instructor on many of the aircraft listed above and was highly respected as an instructor. Dick was a dedicated NWA pilot and employee until mandatory retirement on January 05, 1982.

Another intrepid aviator has passed from our ranks.