Captain Wallace ‘Wally’ Weber, age 97, passed away Sunday June 6th after a brief illness. A lifetime resident of Hastings, MN, Wally was born in Marshall MN on August 19, 1923, to Bill and Rose Weber. Wally’s father Bill Weber started his working years as a harness maker, but when market demand disappeared, he supported his family doing shoe repair. There were five children in the Weber family, two boys and three girls, and Wally was the oldest.

Wally graduated from Hastings High School in 1941 and spent a brief time in California working for Douglas Aircraft. He returned to Minnesota started his lengthy career with Northwest Airlines on August 05, 1942. In response to a call to military duty, Wally enlisted in the Navy in late 1942. Thus begins a most unusual couple pairing. Wally was trained by the Navy in aircraft metalsmith work. His first post training duty station was in Florida and there Wally met his future wife Claire, who was also an USN aircraft metalsmith specialist.

After both Wally and Claire were discharged from the Navy, they returned to Minnesota to start a family. Wally resumed his employment at Northwest Airlines, but not as a metalsmith specialist, but as an equipment service employee doing aircraft cleaning at the NWA St. Paul Airport hangers. In time he secured a slot as a mechanic trainee, eventually becoming certified as an aircraft mechanic and Crew Chief. While assigned to maintenance he opted for training as a Flight Engineer. By 1963-64 NWA began phasing out the flight engineers and offered many of them an opportunity to upgrade to copilot (FO). Wally seized the opportunity and immediately purchased a 1940 J-3 Piper Cub for the purpose of building flight time for his FAA rating. His son Steve owns and flies that very J-3 today. 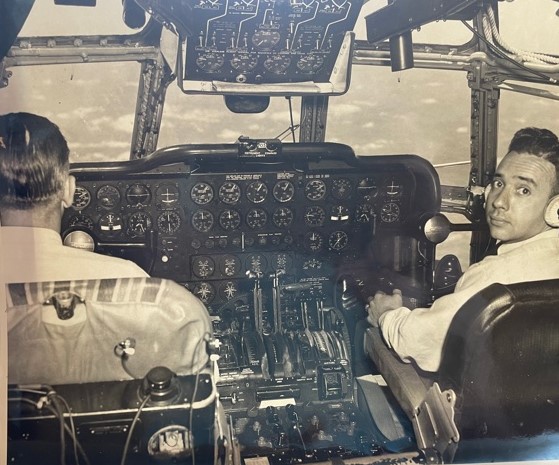 Wally retired from Northwest in 1983. One needs to be mindful that Wally not only worked in aviation, but it was also his passion. In the early 60's Wally and Claire purchased land south of Hastings suitable for a runway. There he used his woodworking and metalsmith skills to build two airplanes and maintained three certified aircraft. His Acrosport II won a Lindy award at the annual EAA airshow in Oshkosh, WI. Wally's curiosity made him a lifetime learner and he found it important to remember the names and faces of everyone he met.

Aviation runs deep in the Weber family. Wally’s son Steve retired from Delta Airlines on December 31, 2016, and soon thereafter his son Brian began his career as a line pilot with Delta. Today Brian is a copilot on the A-320.

There is a wonderful video about Wally's life available at this web link: