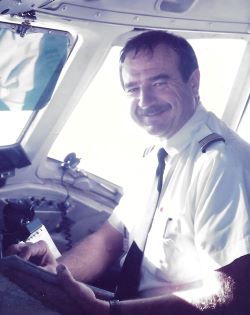 Captain Douglas Baker, age 79, was one of five children raised on the family farm outside of Buffalo, New York. Doug loved to share stories of life on the farm and proudly stated that at night his mother would pull out the bottom dresser drawer and that’s where Doug would sleep.

During his childhood, Doug also gained a great education on the farm, learning everything from raising livestock and growing crops to driving tractors and bulldozers and building ponds. It was also where he got his first taste of flying in a small crop duster – at the age of 13 no less. Doug’s father was a designer for Curtiss-Wright Corporation, no doubt Dad’s influence aroused Doug’s interest in aircraft. Family lore recants that Doug once sold a cow to purchase his first light aircraft.

He eventually left the farm to attend Purdue University on a swimming scholarship. Doug was an Olympic caliber swimmer and was just a couple strokes short of making the US national team. Not one to skirt serious academic studies, Doug graduated from prestigious Purdue University with a degree in Industrial Engineering. After graduation Doug took his first job with Corning Glass which lasted until he was called to active duty in the US Army.

A proud Vietnam Vet, Doug resumed his passion for flying while serving two tours piloting the OV-1 Mohawk on recon missions. His service in the military deeply affected Doug as they lost many men along the way. Doug also flew the Army UH-1 Huey as a Major in the Army Reserve and served with the Minnesota Air National Guard for many years.

During his tenure at the NWA Boston base, Doug and Libby found a 19-room inn for sale in New Hampshire. He turned to Libby and said, “We should buy this.” and of course, true to form, they did. Much like working on the farm, Doug set about reworking the par-3 golf course according to his grand vision – complete with paddocks for sheep and donkeys. They ran Hickory Pond Inn for 15 years and, upon Doug’s second retirement, set off on their next adventure.

In a 45-foot motorcoach, Doug and Libby took off with their two border collies and their cat to tour the USA for months at a time. After traveling up, down and across the country more than once, they ultimately ended up settling in Davenport, Florida. As with many things in Doug and Libby’s life, it was a spontaneous choice made on a whim, but it ushered in a new chapter that resulted in them meeting many of their closest friends. 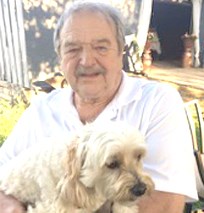 Always a farm boy, Doug had a life-long love for all animals. Those who knew Doug know he never met a dog (or cat, alligator, turtle, crow, donkey, sheep, or gecko) he did not like.

Doug was a true friend to everyone – even his enemies. If a disgruntled neighbor, or anyone else was in trouble, he would be the first one to help.

Doug was also well known for his voice. His big, booming voice could be heard anywhere and everywhere – many times his voice entered the room before he did. Most kids remember Doug’s spot-on Donald Duck impression and singing “Dem bones, dem bones, deem dry bones” while they giggled gleefully. He also entertained his friends and family at gatherings and holiday parties with his wonderful renditions of “Old Man River,” “That’s Life,” “My Way” and other classics, sung in his deep bass voice. We know Doug will be welcomed as a new member to the choral choir in Heaven, where he joins his beloved daughter Jen, and his first son Jim, as well as his parents and other relatives and close friends.

Military services and burial at Fort Snelling will be held in July at a date to be announced.