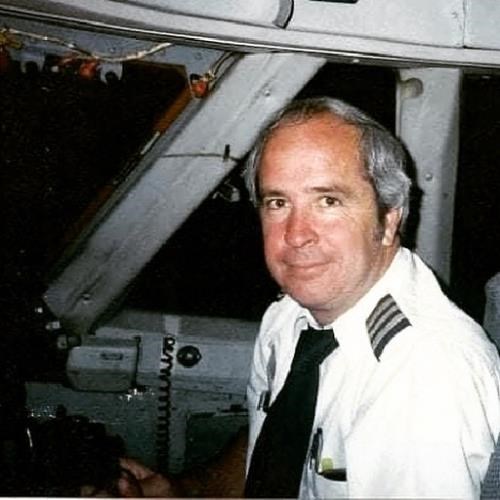 Gene Lee Glenn, age 80, of Trussville, Alabama, died at home on September 25, 2020. Gene "Slatz" Glenn was born on November 12, 1939, in Trussville, Alabama, to George A. Glenn, Sr. and Jean Searcy Glenn. He attended Hewitt High School and was graduated in 1958. He married his high school sweetheart Patricia Ann Needham Glenn in 1960. In 1962 he was graduated from Auburn University with a degree in Mechanical Engineering. Having also completed the USAF ROTC program at Auburn University, he was commissioned in the United States Air Force.

In 1963 Gene graduated from USAF pilot training and thereafter assigned to duty as an Instructor Pilot at Craig Air Force Base at Selma, Alabama, instructing in the T-33, T-37 and T-38 aircraft. In 1968 he separated from active duty and was hired by Northwest Airlines on April 08, 1968. During his NWA career Gene and flew the Boeing 707 series, 727, 747 and Douglas DC-10 aircraft, retiring as a Line Check Airman on the 747-200 in 1999. He logged over 20,000 flight hours and over nine million miles traveled.

Gene was a lifelong member of the Trussville First United Methodist Church and a forty-year member of the Pioneer Sunday School Class. He was a longtime Mason in the Georgiana Davis Lodge in Trussville.

Gene is survived by h is wife of 60 years Patricia; his son Stephen B. Glenn, his daughter Sharon G. Orr, and his son David J. Glenn; Grandchildren Jonathan, Paul, Samson, Elizabeth, Emmeline, George and Arthur; and brothers George A. Glenn, Jr., William B. Glenn , Robert S. Glenn. He is preceded in death by his parents, George A. Glenn, Sr., and Jean S. Glenn, and by his sister, Glenda Gay "Sister" Glenn.