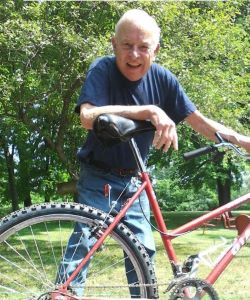 After enduring a 3-year take-off delay and an extended taxi to the runway threshold - Captain Walter J. Piszczek was issued his final departure instructions and cleared for takeoff on his eternal flight westbound. Walter departed peacefully from his family home at "Bethania Mineral Springs" in Osceola, WI. He was age 84.

Wally settled into Retirement on his rural St. Croix River Farm after a thirty-year career with Northwest Airlines leaving the left seat of the 747-400 for the last time on January 14th, 1996.

Wally's professional accomplishments throughout his life are legendary. From his exploits as a Naval Aviator, Aeronautical Engineer with NASA and Astronaut Candidate, Gemini 7 & 8, Apollo 1 Launch Preparation Engineer, William Mitchell College of Law Degree, Member of the Minnesota State Bar, Senior Fellow of the American Institute of Aeronautics and Astronautics, Osceola Village Board Trustee and a valued Member of the Osceola Airport committee.

On the farm - Walt was a skilled machinist, welder, and woodworker – Wally's driven work habits were unmatched in his desire to create and build systems that were meaningful to him – and to his hope – others. He could be found building boats, airplanes and developing his wind power project even welding artistic sculpture in his Barn/shop while listening to Twins games or classical music. Captain Walter was a man of extraordinary personal and professional accomplishments that were only exemplified by how he conducted his life – with hard work, dignity, courage, and humility. Wally the Dad and Walter the Uncle are forever surrounded by the legacy of his extraordinary family - settled all over the world from Osceola to Florida, Great Britain, Ireland, and South Africa. He will be sorely missed, thought of fondly and forever admired in every circle he ever entered.

"The Pennsylvania coal mine was reality for me, I just had to work harder" – WJP - RIP.