Captain Clarence Eugene Hitchcock, age 81, died on May 25, 2020.. For Gene Hitchcock of Laurens, Iowa it all started with a kiddy-corner cut across the state of Iowa, by-passing Iowa State University at Ames, to reach Iowa City and enroll in the Air Force ROTC at the University of Iowa. Following graduation, and with a new Air Force commission, Gene journeyed to Reese Air Force base just outside of Lubbock, Texas to commence pilot training in class 64-C. It was love at first sight for Gene as they were the first class to start in the beautiful T-38 trainer. Gene also fell in love with a Texas Tech student, Suzanne Montague of Beaumont, Texas. After getting his wings, Gene and Suzanne married and headed to Fairchild AFB in Spokane where he would be flying the B-52. It could be said Gene fell in love with every airplane he flew. During those military days Gene deployed to Anderson AFB in Guam and flew into Vietnam with Operation Arc Light.

While in Spokane Gene, and Suzanne’s two children, Kathryn and Harold “Hal” were born. Nearing the end of his military commitment, Gene started looking at the hiring airlines as he found a home with the big planes. Northwest was the first to invite him in for an interview and give him a pass. He liked what he saw.....more Boeing aircraft! They quickly moved to the Twin Cities and joined up in November 06, 1967.

In the early 90’s, while living in the Lakeville area, the Hitchcock’s wanted to jump in a little deeper and fly a little higher by buying, or building, a hangar at the Anoka County Airport. They did not just “buy” a hangar but went all out and built a house in near-by North Oaks to be in close proximity to the hangar. They first purchased the old University of Minnesota hangar which had just come up for sale. As said before, this was an entire family affair. The first big project: Hal wanted to build a Christian Eagle! 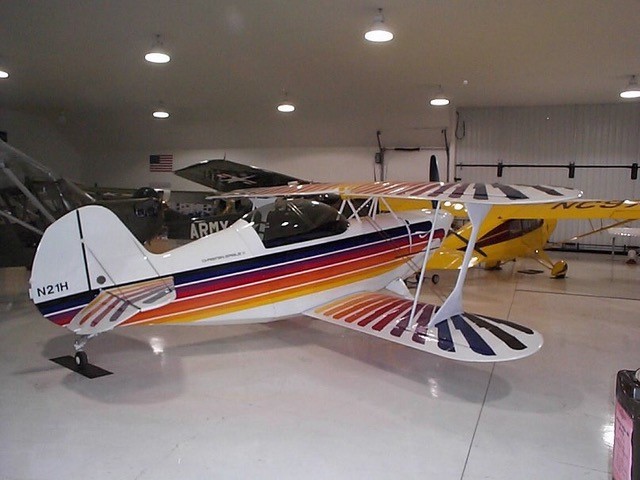 For the unfamiliar, this is a fully aerobatic, home built biplane that was very complex for the first-time builder. But the family went at it with each family member developing their own specialties. This was quickly followed by total rebuilds on several Cessna 172’s, 182’s, and a 206. Thence, a Citabria, and then a Navy T-34! A hangar for Gene and family was not to just store aircraft. It was a place to work together and do total....every nut, bolt, and rivet rebuilds. (By the way, Suzanne has a great reputation as a riveter.). Mom and Hal learned to fly and got their licenses in a 172 that they had rebuilt.

In 1997, about the time they were finishing the T-34B, Gene bought an imported war bird, a North American T-28 “Fennec”. The Fennec served as an attack and fighter aircraft with the French Moroccan Air Force. But it was too big for the U of M hangar. There was a large parcel of land next to their facility, so the Hitchcock’s immediately leased same and built a 60 x 80 hangar to house their growing enterprise. The 23 year project T-28 Fennec is in its final weeks. The airplane has been repainted in original French Moroccan colors. It is like a T-28B, but also equipped with hard points for weapons of war. 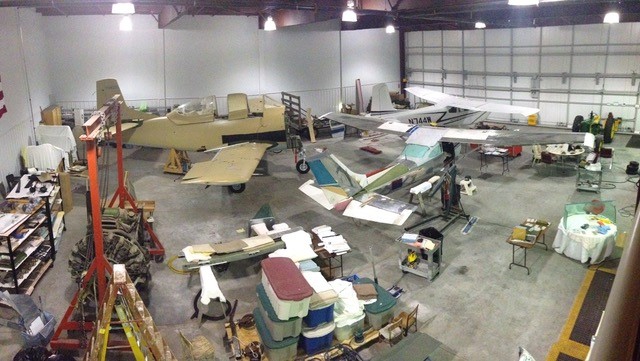 The family also have interests in some unique four wheelers. A Morris Minor pick-up truck (with right hand drive) and three Mini Coopers are in varied stages of restoration.

Gene continued quarter-backing the many family projects and did extensive research on every facet of the rebuilds. Quite often the Hitchcock’s brought in outside help (usually a former NWA mechanic) to help with special projects. Finding or manufacturing rare parts was always a very time consuming …. and expensive effort. The hangar was well equipped with overhaul equipment, engine stands, hoists, and tooling, allowed them space and flexibility to handle all their varied projects.

In time Gene wanted to slow up a bit and complete the T-28 Fennec project along with a few auto restorations. Obviously, no one could step in and do things like Gene was doing. His son Hal, the logical one to take over, has a law practice in Cambridge that would not allow the time commitment required. So, with some outside help coming in to help finish the projects, the airplane and assets will go on the market.

In recent months Gene was having difficulty with his health and was hospitalized. During that time, he experienced a heart attack and passed away on May 30th. Because of Covid 19 restrictions, funeral services were private for the family. Gene’s remains were interned next to those of his daughter within St. Christopher’s Church in Roseville, MN. Daughter Kathleen died in 2007.