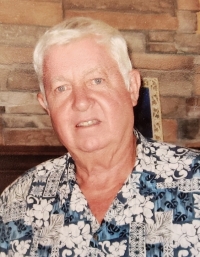 Captain Roger D. Albertson, age 83, of Lake City, Texas and Colfax, Wisconsin completed a final ‘soft landing’ on April 18, 2020 as he passed from this life to Heaven where he gets to be with Jesus forever. He died at home in Colfax, Wisconsin surrounded by his loving family.

Roger was born April 4, 1937 in Winona, MN to Orvin and Arleen Albertson. He had one older sister and brother. Roger’s father was a farmer and church custodian. His Mother was a teacher. Roger attended country grade school in Bennett Valley (Buffalo Co, WI), spent two years at Eleva-Strum High School and graduated from Eau Claire High School in 1955. Despite the move, Roger remained active in high schools; he was a notable good student who participated in school plays, he especially liked musicals, choir, tennis, and the track team.

It would appear to some that Roger did everything in time clusters. On June 5, 1959, he married his high school sweetheart and love of his life, Joan Christine Litsheim of Eau Claire, WI.  Two days after the wedding he graduated from St. Olaf College with a BS degree in Biology and Air Science. The same day Roger was commissioned as a 2nd Lt. in the United States Air Force.

Roger’s Air Force years were fast, intense years. He and Joan became well acquainted with many air bases. The first was Lackland AFB, TX for pre-flight and then south to Mission Air Force Base in the Rio Grande Valley. He received his pilot training there in the T-34, T-37, and T-33 aircraft. After graduation from pilot training Roger was as to Castle AFB, CA for SAC Crew Training in the KC-97. His first operational assignment was to 98th Air Refueling Squadron (KC-97) at Lincoln, AFB, NE. When SAC phased out their KC-97 squadrons, Joan and Rogers packed up and were off to Roswell AFB for KC-135 crew training. Along the way there was temporary duty at Sheppard AFB and Squadron Officer School (SOS) at Maxwell AFB. Through all this Joan was caregiving children and keeping Roger on time and his uniforms looking sharp. Roger completed his seven years of active duty at Pease AFB, NH.

Like many NWA pilots, Roger elected to leave the military to provide a more stable environment to raise his family. However, his great love of country never left him and he raised his children to appreciate what it means to be an American and never take their freedoms for granted. There arose a decision moment between airline employment with Braniff or NWA. What a fortuitous call it was to select NWA. Roger was hired as a pilot by Northwest Airlines on March 23, 1967. He began his career as a second officer (S/O) on the Boeing 727 and later flew various seats on the Boeing 707, Boeing 757, DC-10, and the Boeing 747 Classic. Late in his career Rogers started having serious back problems, which led Roger to retired six months early in late 1996. At the time of his retirement Roger was flying captain on the Boeing 747 Classic based at Honolulu. HI.

Flying airplanes was not Roger’s only skill. He was an exceptionally talented carpenter. From their 80 acres ‘hobby farm’ Roger harvested walnut and Oak which he cut down, had milled, and expertly prepared for making his own wood furniture and figurines. He also imported KOA wood from the Big Island of Hawaii. His wood products included multi-story spiral staircases.  When not cutting and sanding, he grew corn, soybeans, pumpkins, squash, and replanted pine and walnut trees to replace those he harvested.

For many years Roger was an active member of Zion Lutheran Church, Cottage Grove, MN. Gifted with a wonderful voice from his youth, Roger sang in the choir, and served on several committees, including Church Council President.  He also performed with the St. Paul Chapter Barbershop Chorus. After retirement Roger and Joan lived seasonally on Lake Corpus Christi, TX.  Now married 60 years the couple enjoyed watching the sunsets both at home and during their travels.  We remember he would often plan the day in a way to make sure we were in the “perfect” spot to “catch the sunset”.

Roger’s warm, generous spirit will be dearly missed by all who knew him.