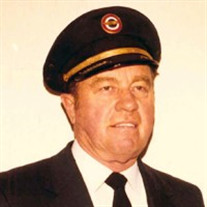 John was hired by NWA as a mechanic on June 14, 1943. However, his NWA employment was soon interrupted by military service which lasted until late 1946. In early 1947, John returned to Minnesota and resumed his career with NWA Maintenance. He flourished in the maintenance career track and arose to become a master mechanic, crew chief and flight engineer. In 1964 John was given an opportunity to receive pilot training and upgrade to copilot. He chose the training and that was the beginning of his second career track as a pilot, culminating in mandatory pilot retirement as a captain on November 30, 1986.

After retirement John joined RNPA and also discovered his talents and passion for creating beautiful wood carvings. Fishing was also a joy (when he was lucky). John volunteered at the organization ‘Bridging’ for many years where they welcomed his incredible handyman talents and skills. He enjoyed watching the birds, deer and other wildlife from his kitchen table and enjoyed visits from friends and family, sharing stories. John was preceded in death by his wife, Delphine, son Rob and sisters Ester, Mary, and Alma. He is survived by his daughter, Sheri, son-in-law Al, beloved granddaughter Shelby, sisters Delores and Martha, and many nieces and nephews.