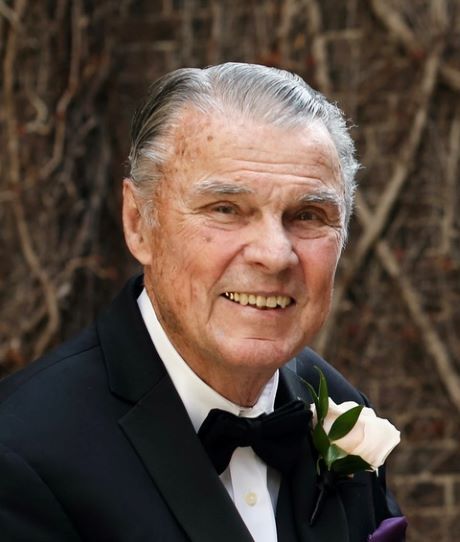 In high school he was a good student who enjoyed basketball and whose family responsibilities included farm chores.    Al enrolled at Murray State College in western Kentucky. Family lore has it that when Al was nineteen, he visited the local airport and observed a gleaming silver Douglas DC-3 airplane piloted by a white-scarfed aviator.  He knew instantly what he wanted to do with his life.

Shortly thereafter he enlisted in the US Marines destined for the US Navy Aviation Cadet (NAVCAD) program. Al’s very first airplane flight was aboard a military aircraft transporting him to begin preflight training with the Navy. Like most Naval/Aviators Al began his flight training at NAS Pensacola. After many hours learning to conqueror the SNJ, Al earned his coveted ‘wings of gold’ and his commission in the USMC.  Al had the good fortune to be assigned to USMC VMA 312 (formerly VFA 312) the “Checkerboard” squadron. The time would have been 1954 or 1955 and VMA 312 had recently transitioned from the F4U-4 Corsair to the F9F-4 Panther. In 1955 the squadron began another transition to the North American FJ-2 and FJ-3 (the Navy version of the Saber Jet).

On a blind date at NAS Pensacola Al met Imogene (Jean) Pederson. In time the couple married, and with great finesse Jean convinced Al to move to the frozen land of Minnesota. After separation from the active Marine Corps, Al enrolled at the University of Minnesota. However, concentrating on his professor’s lectures after having recently flown jet fighters proved to be impossible. The call of aviation beckoned, and Al signed on for a career with Northwest Airlines (NWA).

While flying the line in the DC-10, Al linked up with Bill Parent for a flight in Bill’s Stearman. Al made the approach to landing fine, but just couldn’t put the thing on the ground. A common problem for pilots used to flying wide body aircraft with high sitting heights. A go-around was required.    In a unique career quirk, Al was the ‘model’ pilot in an NWA advertisement in Time Magazine. Not surprising he did not get paid for the photo session.

For years Al was a Viking season ticket holder at Metropolitan stadium. He was also an avid golfer, winning the local senior club championship at age 75. Post retirement Al and Jean moved to Florida permanently. Out their back window was the 3rd hold green of the local golf course. On several occasions at 5 PM he would take his son Brian out his back door and onto the course for a few holes and golfing instruction.    Retirement life in Florida included occasional dinners at the American Legion, fishing, crossword puzzle work, and plenty of reading. Travel included trips to Norway, Russia (Moscow), France (Paris), Germany, Spain and Portugal.  He was surprised at how much he enjoyed Spain.

Jean preceded Al in death on February 8, 2014. Al is survived by his daughter Tonia, son Brian, and grandsons Justin and Morgan.