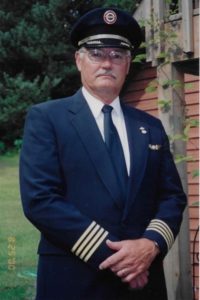 Captain Larry Alan Potton, age 79, of River Falls, Wisconsin died at his home surrounded by his family on Sunday, January 12, 2020, after stoically battling cancer. Larry was born in Clinton, Wisconsin on July 6, 1940, the third child of Howard and Martha (Roberts) Potton. Larry spent his youth in Avalon, Wisconsin hunting and fishing with his father and two brothers, Bill and Dale, and tormenting his little sister, Ruth Ann.

Larry Potton graduated from Clinton High School, class of 1958, and from the University of Wisconsin – Platteville in 1962.  He earned his Wings in 1964, proudly serving for five years as a Naval Aviator with Helicopter Combat Support Squadron 2 (HC-2), also known as the “Fleet Angels”. He and Linda Millman, of Platteville, Wisconsin, eloped and were married at Lakehurst Naval Air Station on June 12, 1964.

After separating from the Navy, Larry was hired by Northwest Airlines on September 05, 1967. He flew the range of NWA aircraft operated in his era; e.g., the Boeing 727, 720/320, the DC-10 and Boeing 747 Classic. When Larry retired on July 07, 2000 he had recently been based in Minneapolis and Anchorage flying the 747 Classic. Larry’s airline career at NWA lasted 33 years.

Larry loved spending time at his old orchard tinkering on tractors and hunting with his family and friends. He especially enjoyed attending his grandchildren’s concerts and sporting events. Larry is survived by his wife of 55 years, Linda; his four children, Cynthia (Scott) Kuenzi of Madison, Stephanie Brown of River Falls, Howard (Katie) Potton of Anchorage, and Sarah (Andrew) Graff of Chicago;  brother William (Thelma) Potton of Detroit, and his sister Ruth Ann (Dan) Clark of Neillsville; and his nine grandchildren: Ashley and Megan Brown; Glen, Reid and Tess Kuenzi; Nicholas and Danielle Potton; and, Abbie and Sylvie Graff. Larry is preceded in death by his parents and his brother, Dale Potton.