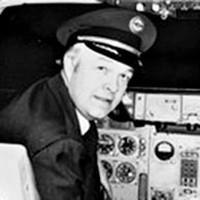 Captain Richard Bradford, age 83, passed away peacefully on November 8, 2019. Born in Utah to Harold and Ethel Bradford, Dick was educated in Utah and deeply grounded in the Church of Jesus Christ of the Latter-Day Saints (LDS).

After college Dick was commissioned in the Utah Air National Guard. He spent two years on active duty undergoing pilot training and fighter transition before returning to the Utah ANG. Assigned to the 191st Fighter Interceptor Squadron, Dick flew the F-86A and F-86L (very similar to the F-86D) and stood Air Defense Command (ADC) alert duty.

Northwest Airlines hired Dick on October 30, 1958; he was one of the youngest in his NWA pilot class. Significantly he was employed at the end of the hiring wave of the 1950s soon to be followed by an extended period of no pilot hiring. His initial checkout was as copilot on the DC-4. He experienced the last of the era of great propeller airplanes; flying copilot on the DC-6, DC-7, Boeing 377 Stratocruiser, and the Lockheed Electra. With the entry of the jet age, Dick flew captain on the Boeing 727, the 707 series, the DC-10 and the classic 747. He also served the NWA Training Department for many of years as an instructor/check airman, finishing his career as the Training Manager on the DC-10.

As a product of the NWA -Soderlind era of pitch/power flying, Dick was especially gifted at teaching these piloting skills. His explanations of pitch/power relationship were worthy of textbook content. He imbued his trainees with tidbits of wisdom about aircraft performance and meteorology that prepared them for line flying challenges. His NWA career ended when he was permanently physically grounded in 1984.

Dick was devoted to his church, the Church of Jesus Christ of the Latter-Day Saints (LDS) in Burnsville, MN.   He served as the first Bishop of the Burnsville Ward Building and in many other callings within the church. In retirement his family and his church became central in his life.