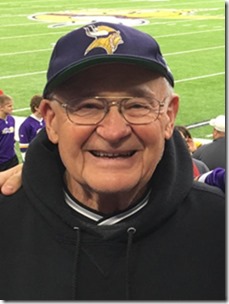 Captain Wayne Segulia, age 90, was born and raised in Butte, Montana. He graduated high school in 1948 then attended Montana School of Mines to study Metallurgy. At the end of his third year (1951) he enlisted in the Air Force.

Wayne completed basic training and Aviation Cadet preflight at Lackland AFB, followed by flight training at Webb, Spence and Luke AFB. Then he completed pilot and special weapons training (MK-7) at Langley AFB.  In 1953 he was sent to Korea and arrived the day the armistice agreement was signed. After a brief time in Korea, he was then stationed at Itazuke AFB, Japan from 1953 to 1955. He only said that his squadron flew air security because much of his duty while stationed at Itazuke was top secret.

Wayne flew a number of aircraft while in the Air Force including: the T-6 Texan, T-28A Trojan, T-33 T-Bird, F-84F Thunderstreak, F-84G Thunderjet, and F-86 Sabre. Wayne wasn’t one to talk a lot about his many experiences, but he did tell about his crash landing during training at Luke AFB in 1953. Although he might never mentioned the event, had it not been for Nick Modders finding a photo of the plane on-line in the AAIR files. At the time the picture was taken, the plane had been repaired and use by the Norwegian Air Force and retired to a Museum.

According to Wayne’s narrative, “It was May 14,1953. I was 2nd Lieutenant and 22 years old. It was the usual nice day at Luke and we were heading out to practice bomb. On my way to my plane I found a quarter on the tarmac, and put it in my pocket. The instructor led us to the practice bombing range. We were in a group of three, plus the instructor, in F-84G straight wing fighter bombers that were limited to .84 Mach, with tip tanks. Made by Republic Aviation Corp. I’m not sure but, I think these planes were the first to be noted as ‘lead sleds’. In any event, it was a good stable machine. We were practicing skip-bombing on the gunnery range. The planes were equipped with 8 practice bombs which were actually 3 pound smoke bombs affixed under the wings. The bombs each had a shotgun shell and a pin inside. On impact, the bomb would release a chemical that made a big cloud, marking the strike location. The gunnery crew was on the ground spotting and recording the results. The planes would approach in sequence, one at a time at about 300-400kts. Skip bombing involved releasing a bomb in a manner where it would skip off the ground once or more and eventually slam into the side of the target. It required mostly manual aiming by the pilot and I could be more accurate if I flew at a low altitude, and it was more fun at about 20 feet off the ground! (This, of course, was lower than advised). We released the bomb by pressing the red button on the control stick. We called it the “pip”. I was hitting the target almost every time. This day the range officer reported that I was approaching the target too low...I did it again and hit the target again. Again he radioed that I was too low. Then they sent me to high altitude to circle and wait until everyone else completed all 8 runs

After the session I immediately followed the instructor on landing. The tip tanks were completely empty. We were landing to the south at approximately 170kts. Just as the landing gear touched down I cut power as normal but the right wheel folded under and the right tip tank skidded on the runway. I knew the tanks were empty and highly flammable! As the tank skidded across the runway it blew the outside half clean off the tank right along its welded aluminum seam. The plane pulled to the right. I used hard rudder left and left brake but it kept rotating right, skidding into the desert dirt. I saw a ravine ahead so I released the brake and rudder and let the plane spin. Eventually it rotated over 360 degrees and stopped just short of the ravine facing northeast skidding a total of 1.1 miles in a big arc. I could see what I thought was smoke coming from the right side of the plane so I opened the canopy and jumped out of the cockpit on the left side (the high side), only to realize that I still had my helmet on, oxygen hose and all! I was hung up by the oxygen hose and my feet barely could touch the ground. I grabbed the edge of the cockpit and did a pull-up but the quick-disconnect mechanism didn’t work. I kept twisting until it finally did and I dropped to the ground. I still had my helmet and parachute on. I ran like hell, thinking the plane was on fire! The ambulance chased me down and the medic said (laughing), “We had a hard time catching you!” They took me to the flight surgeon’s office and, it’s not a myth, they gave me a big shot of whiskey to calm me down. As soon as they thought I was okay I was sent directly to the base commander who was, needless to say, quite upset! This accident was a blemish on his very good record. I saluted him and he asked if I was ok, then let me know that the Sgt. mechanic reported that the landing gear rod wasn’t in the "down position" as required, and knowing this would cause the issue, the Colonel looked at me and yelled, “you’re grounded!” Just about then, the Squadron Commander came in and the Colonel said, “Your boy didn’t have the gear down!” The Commander said, “Sir I just came from the plane and saw that the handle was in the down and locked position.  The plastic shroud on the lever was broken and made it look like the lever was not in the right position.  But this was not pilot error!” I was eventually dismissed and relieved!

A few days later, I saw the plane on the tarmac, on all three landing gear, but with some damage and the right tip tank was split along the weld line just like I thought. Later I learned that the root cause was a failed cotter pin. The last I saw of the plane, they were hauling it away on a flat bed…..and, by-the-way, that quarter was the last found coin I’ve ever kept!”

*The plane is now in the Flyhistorik Museum Sola, Stavanger, Norway

After his release from the active Air Force, Wayne was hired by Northwest Airlines on May 16, 1959. He flew briefly for Western Airlines during a lay-off and then was recalled by the Air Force for 12 months active duty in 1961, assigned to the 162 Tactical Fighter Squadron, Springfield, Ohio. While at Northwest he flew mainly domestic flights with occasional international flights to Canada, UK and Europe.

Wayne said there were a few flights that he would always remember from his 31 years as a commercial pilot:

—The three times his planes were struck by lightning.

—An evening flight from MSP when during the climb, the fully loaded DC-10 gave a big shudder and he realized he had lost an engine. Before he could radio, the tower already was asking where he wanted to dump fuel. He dumped fuel, returned and landed without incident. It was the #2 engine that blew. The air traffic control said it lit up the whole sky over the airport.

—A “sightseeing” flight that he took his passengers on from Seattle to Minneapolis. He flew low along the Columbia River and over the Rocky Mountains pointing out the sights and landmarks along the way. He said it was all good until the Chief Pilot called him in to congratulate him on all the nice letters he’d received from passengers saying what a wonderful “tour guide” Captain Segulia had been, flying so low and showing them the sights. He smiled and said, “I never did that again!”

— When he saw the beginning of the Mount St Helens eruption in 1980 as he flew to Seattle.

— The day he was inflight, within sight range, when the Challenger Space Shuttle launched from Cape Canaveral in 1986. He had just pointed it out to the passengers seconds before it exploded. He, his crew and passengers witnessed the tragic disaster as it unfolded.

Wayne flew the following aircraft at NWA: the Lockheed Electra L-188, DC-7, DC-8, Boeing 707 series, Boeing 727 and was flying the DC-10 when he retired on July 23, 1990. He said he most enjoyed flying the Electra and the DC-10. He was recently in the process of totaling his military and commercial flight hours and felt they would add up to approximately 3 years of his life in the air.